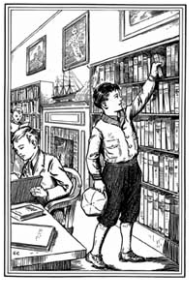 Anyone who knows me, knows that my bibliophilia sometimes turns into bibliomania ! Every room in my house is a library, sometimes with floor-to-ceiling bookshelves.

My complete book collection wanders through many literary by-ways. Some of my favorite sub-collections include volumes from the Roycroft and Mosher Presses (two early twentieth-century American "Arts & Crafts" presses), books on mediums & Spiritualism, a wide collection of Pre-Raphaelite-related books, and 19th- & 20th-century letter-writing books. Some favorite long-forgotten and now obscure writers (and one well-known writer) whose works fill many of my shelves include William DeMorgan, Richard LeGallienne, Hamilton Wright Mabie, Fiona Macleod [the pseudonym of William Sharp] ... and Thomas Hardy.

And then there are the "special titles" that I greedily hoard (the mania part). I have nearly 20 copies of Mitchell's Reveries of a Bachelor (first published in 1850), more than 25 copies of Olive Schreiner's Dreams (first published in 1891), and over 30 copies of Robert Louis Stevenson's A Child's Garden of Verses (including the copy my parents gave me for Christmas when I was two years old).

There, in the night, where none can spy
all in my hunter's camp I lie,
and play at books that I have read
till it is time to go to bed.

Robert Louis Stevenson, The Land of Story Books.
​Find me on Goodreads.